The only 3 causes of conflict 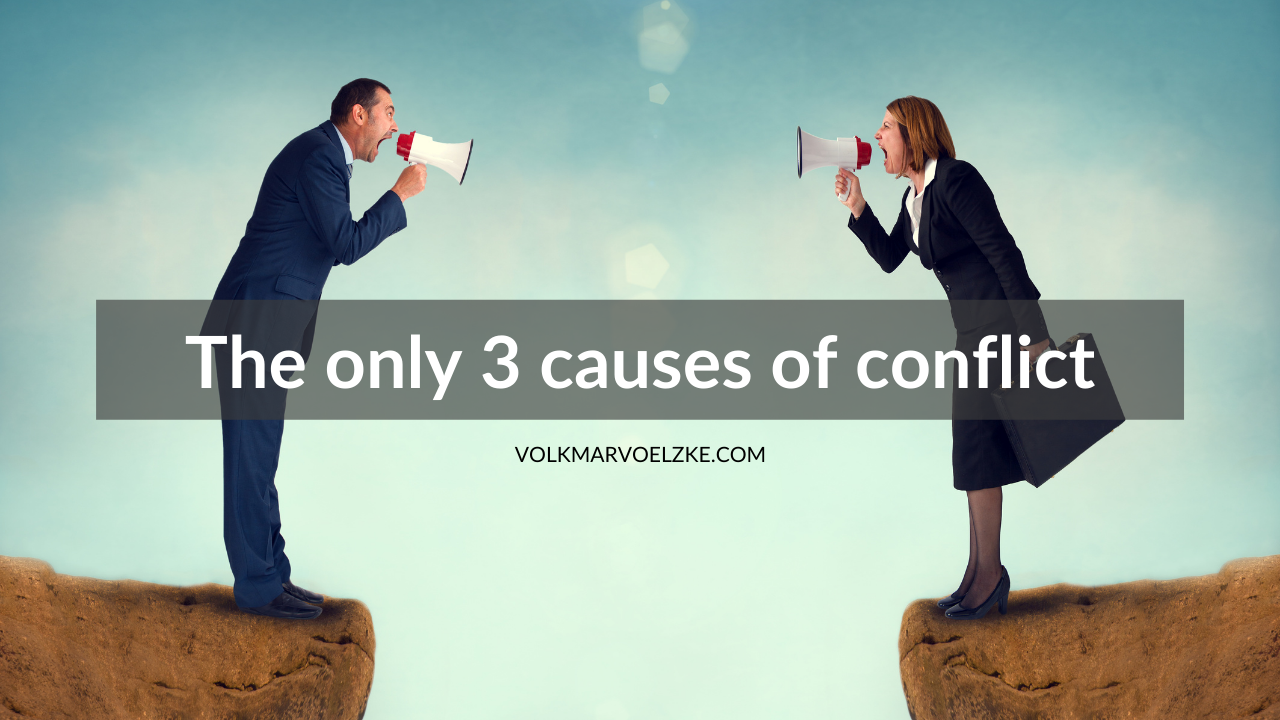 Conflicts are part of life like salt in the soup. Especially in the professional environment, avoiding conflict is one of the causes of poor collaboration.

If we don't address conflicts, they smolder on anyway and lead to an artificial harmony that benefits no one.

Often, fear is the cause of holding back conflict because we don't know how to handle it.

To effectively deal with conflict, it is critical to know the root causes.

Here comes the good news: there are only exactly three basic causes of conflict. Here they are in a nutshell:

The 3 most important psychology insights for leaders 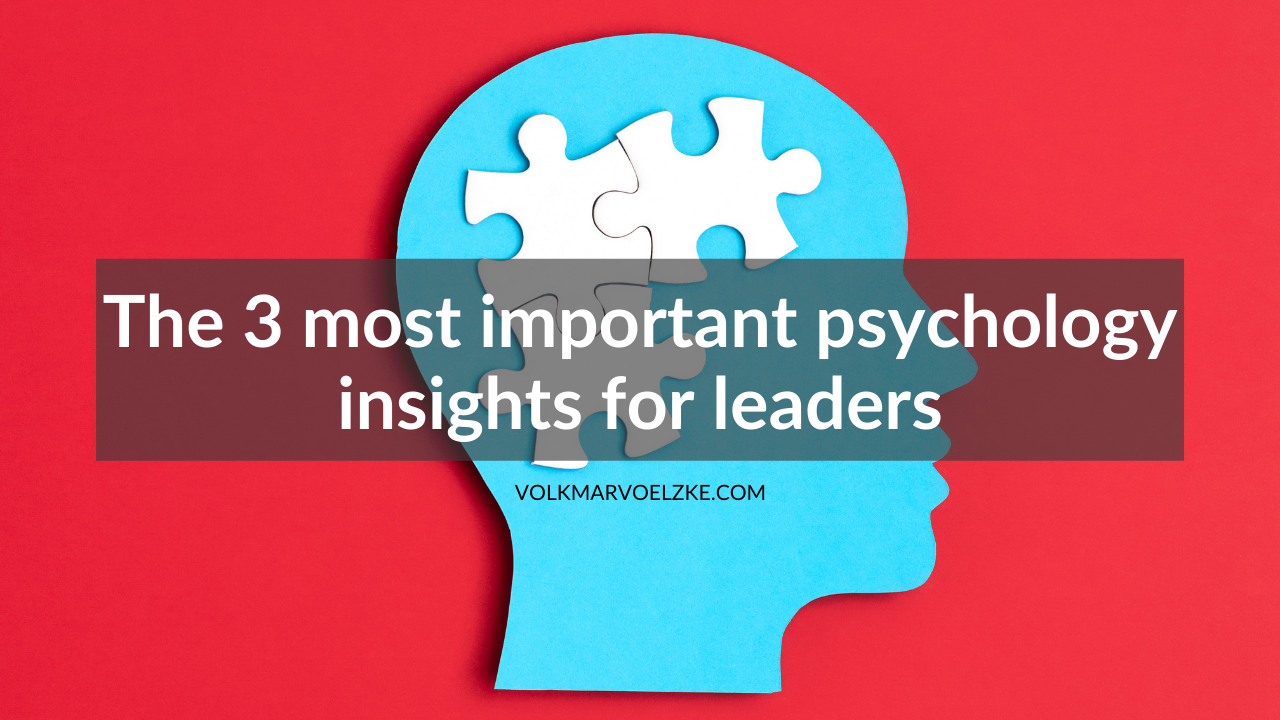 As a leader, how well do you know psychology? Your answer to this question strongly determines your influence, productivity and overall success as a leader.

After all, let's not kid ourselves: Your success is largely determined by the extent to which you can understand and influence other people. And you can't do that without psychology.

By the way, I know from my own experience that you can learn all this. Because being an engineer, knowledge of human nature, influencing and leadership were by no means components of my engineering studies.

What it essentially takes is interest and application, especially through coaching or leading others.

Here are three extremely important insights from psychology, from my experience, that most leaders pay far too little attention to:

How to strengthen team bonding 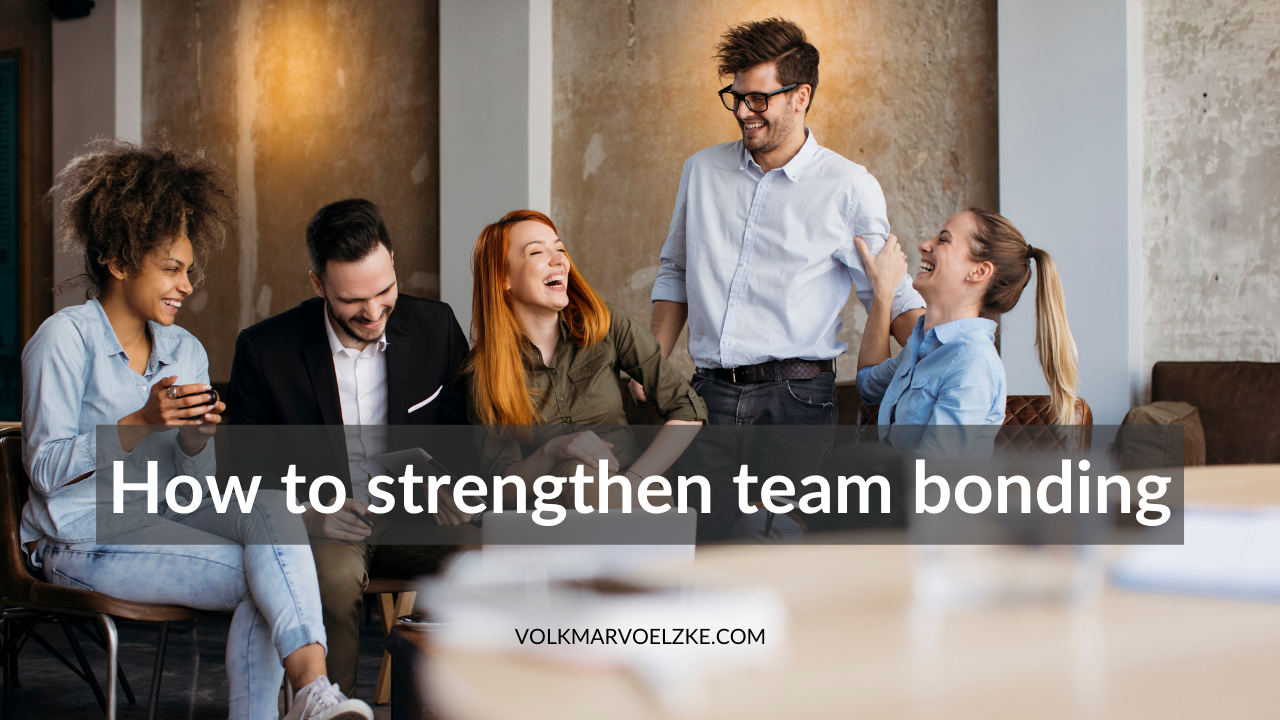 One of the most frequent questions I am asked is how you can make a team out of your people that stand together and work closely with each other.

Unfortunately, the reality is often different: people work against each other, or at least there is a certain indifference to each other's goals.

We are often so busy with our own stuff that there is no time and attention for the needs and problems of others.

Conversely, imagine what you could accomplish with your team if everyone marched with full energy in a common direction and everyone could fully rely on the others.

The gap between this ideal state and your reality shows your potential as a leader. And even if the gap doesn't seem too big to you, you usually have various opportunities to achieve more.

Here are the biggest levers, from my experience, to sustainably build team cohesion:

🏁 How to ensure the implementation of strategies 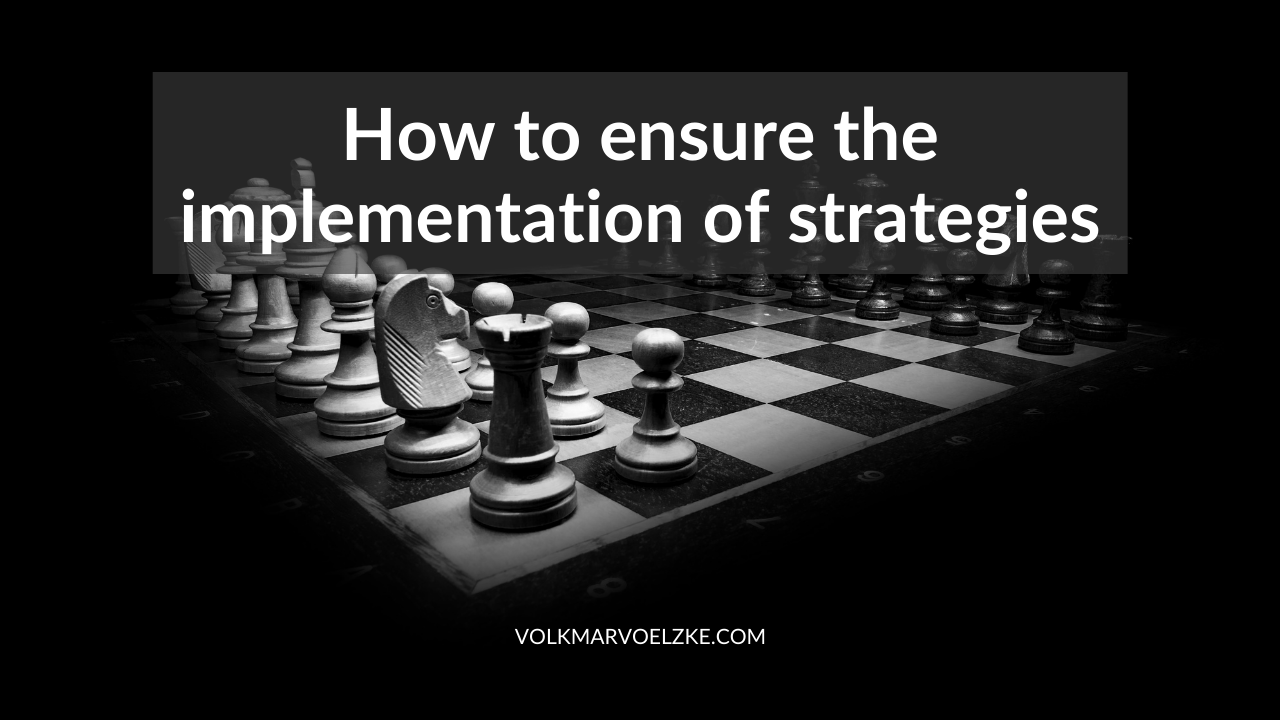 Do you always fully implement your business strategies? My experience shows: hardly anyone manages to do that.

And I'm not talking about deliberately interrupting the implementation because important parameters have shifted.

No, I'm talking about the fact that you and the leadership team really want to implement the strategy, but it's still not progressing properly.

This does not only waste valuable resources. No, you also lose time and, most importantly, it frustrates people.

There are various companies where the lack of strategy implementation has already become a habit. "This too shall pass" is a typical statement from the people who are supposed to be driving the implementation.

Why is this so difficult? Why do important strategic decisions too often fall by the wayside and opportunities go unused?

Here are the three most important levers you need to operate, from my experience, if you want to implement your strategies and reap full benefits: 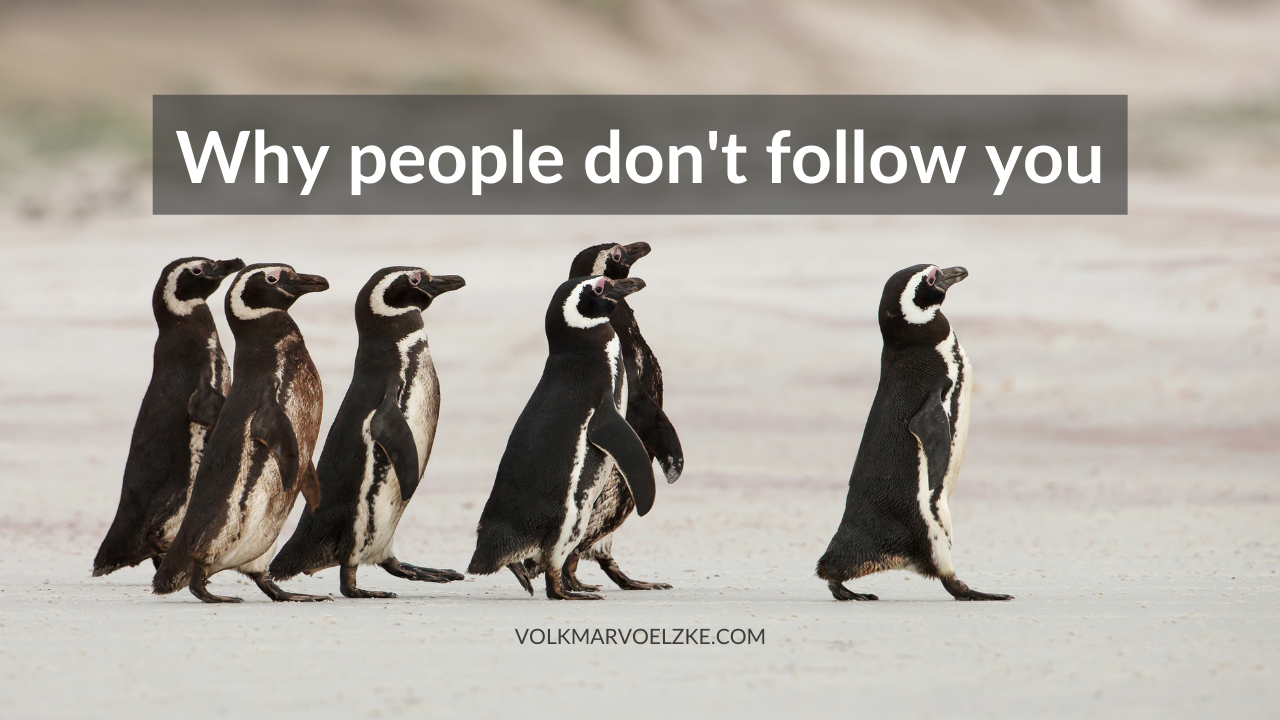 It's simple: if no one follows you, you don't qualify as a leader. And vice versa: the more people follow you, the stronger your influence as a leader.

We've known about the phenomenon of "influencers" not just since social media. Influential leaders have always had a sizable number of "followers."

Here, however, is something very simple that is relevant to anyone who wants to influence others in any way: it's about influencing others in such a way that they willingly and freely follow you.

If you can do that, you can move the proverbial mountains.

By the way, this has absolutely nothing to do with “obedient following." On the contrary, the more your people critically question and challenge you, the greater your influence - provided you are willing to accept the challenges and deal with the criticism.

Leaders come to me time and again with the question of why people don't follow them enough: "Why aren't they doing what we agreed? Why aren't they implementing things...

🧭 More productive in sales: Here's how! 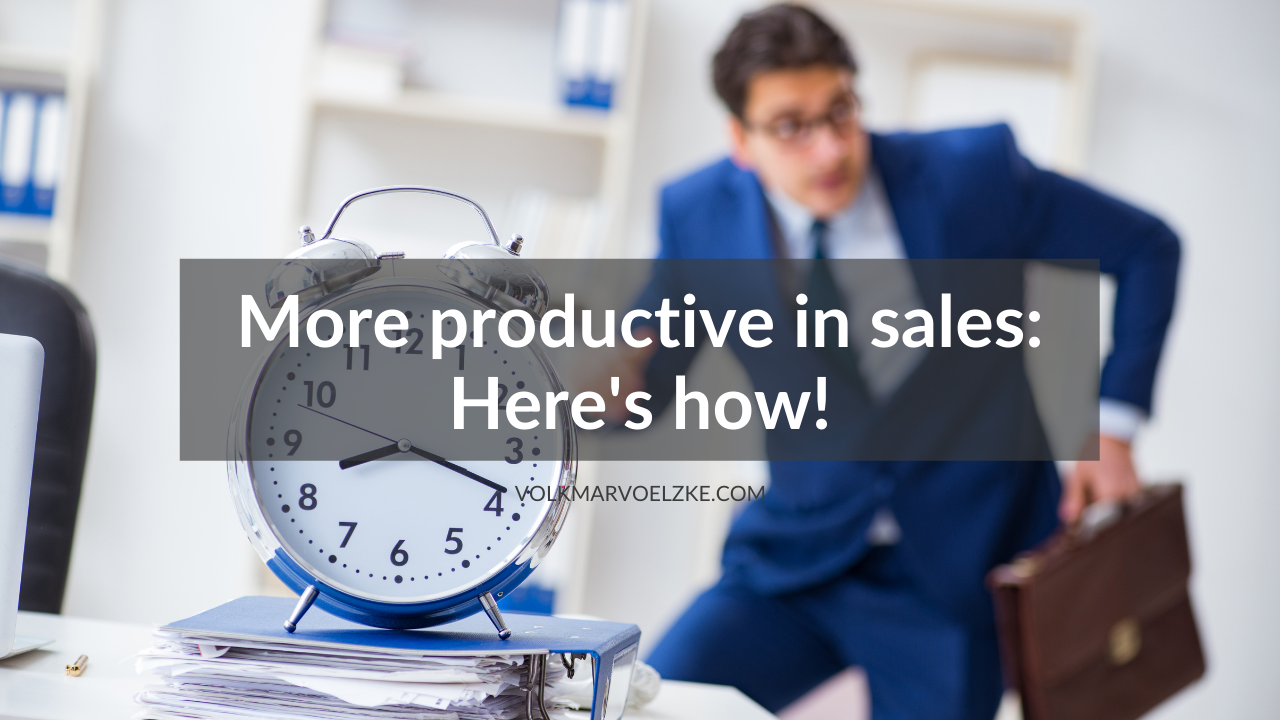 When you ask sales managers and salespeople how they can get better at selling, you usually get answers that relate to methods:

That's all well and good. Except that, in my experience and observation, there are two other factors that are even more important for sustainable success in sales: Mindset and personal productivity.

Imagine a salesperson creating 20, 30, or even 50% more in the same amount of time: how much more could they create and sell? What I'm saying is: the leverage of productivity in sales is enormous.

Here are 3 key starting points you can use to significantly increase sales productivity:

🥸 Do you want to get better? Seriously? 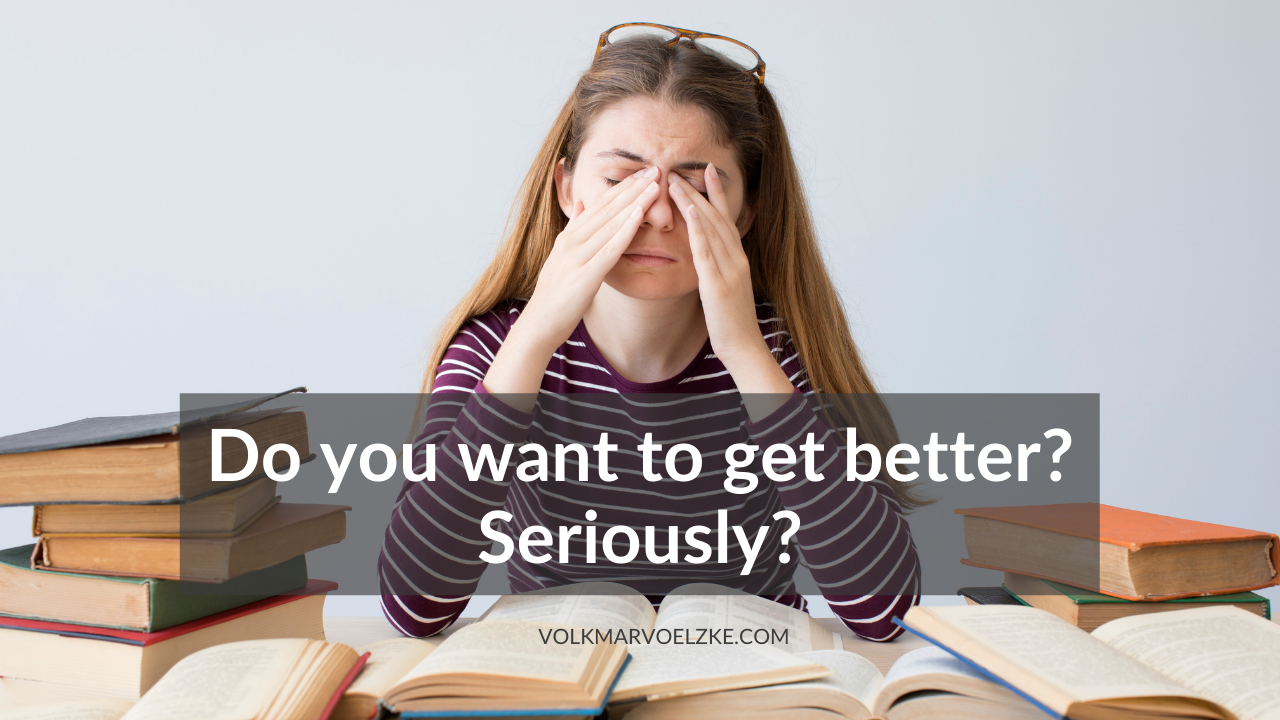 The question "Do you want to get better?" is, of course, a rhetorical one. After all, who doesn't want to? But what most overlook is that to get better in a sustainable way, you need a system.

That's exactly why, when it comes to certain things, after a short learning curve at the beginning, our skills keep us on a plateau from which we hardly improve.

What we need to improve continuously and significantly is what psychology professor Anders Ericsson describes in his book Peak as "deliberate practice."

Here, however, I am concerned with something that lies even before that. Because the reason why we don't really peak, even if it would be absolutely beneficial for us, lies elsewhere. If you are aware of that, you can deal with it accordingly.

Here are the three powerful levers on how any person or team can become better than everyone else:

⚡️ How to have energy all day 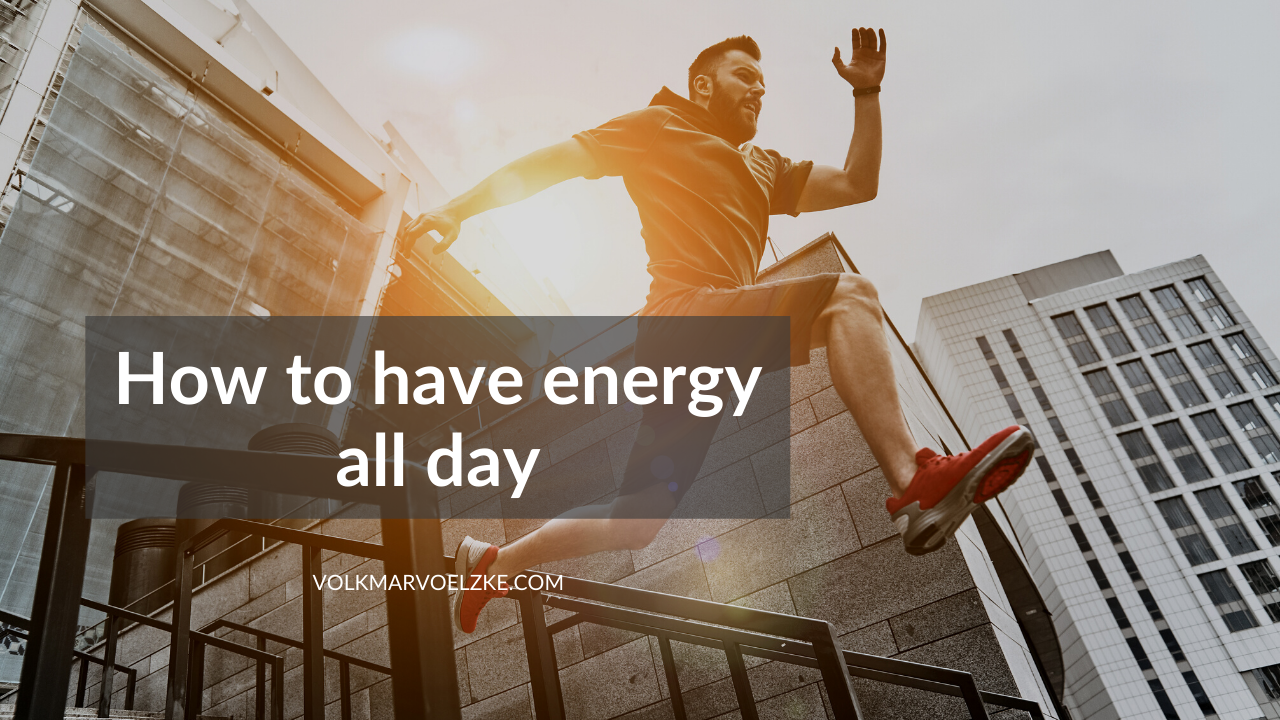 It's just a fact: you can have all kinds of great techniques to increase your productivity and get more done. However, if you can't keep your energy levels at their highest, it's not going to do you much good.

People who get significantly more done than the average person have higher overall physical and mental energy levels throughout the entire day. In my leadership coaching, this is often an important topic.

This much, though, is true: if you start focusing more on being in control of your energy levels, you'll almost inevitably increase your success. And - most importantly - with more fun and less time consumption.

Sounds too good to be true?

Here are 3 ideas on how to increase your energy throughout the day (which are pretty simple, but few apply them consistently): 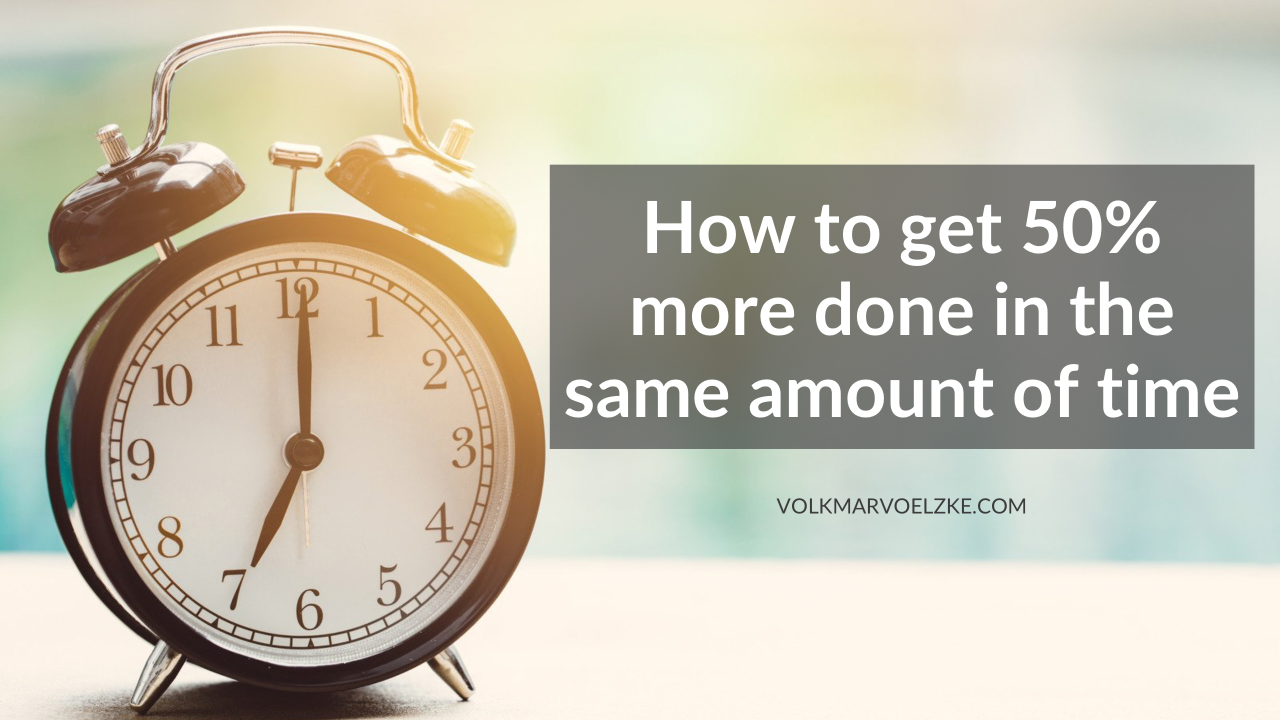 Yes, I know the headline sounds a bit sensational, but it's still true: if you consistently apply the tips I'll give you below, you'll be able to do twice as much in the same amount of time.

It's just that, as with many strategies, they're relatively easy to understand, but by no means easy to apply consistently. What's getting in the way? Our deeply ingrained beliefs and our habits.

And yet, on certain topics, you are already 10x or even 100x more productive than someone who lacks knowledge. A top programmer, for example, programs up to 100x as fast as a beginner.

So, what strategies do you use when you are exceptionally productive? Once you know the answer, you can apply it to everything else.

Here are the top three strategies for getting 50% more done in the same amount of time: 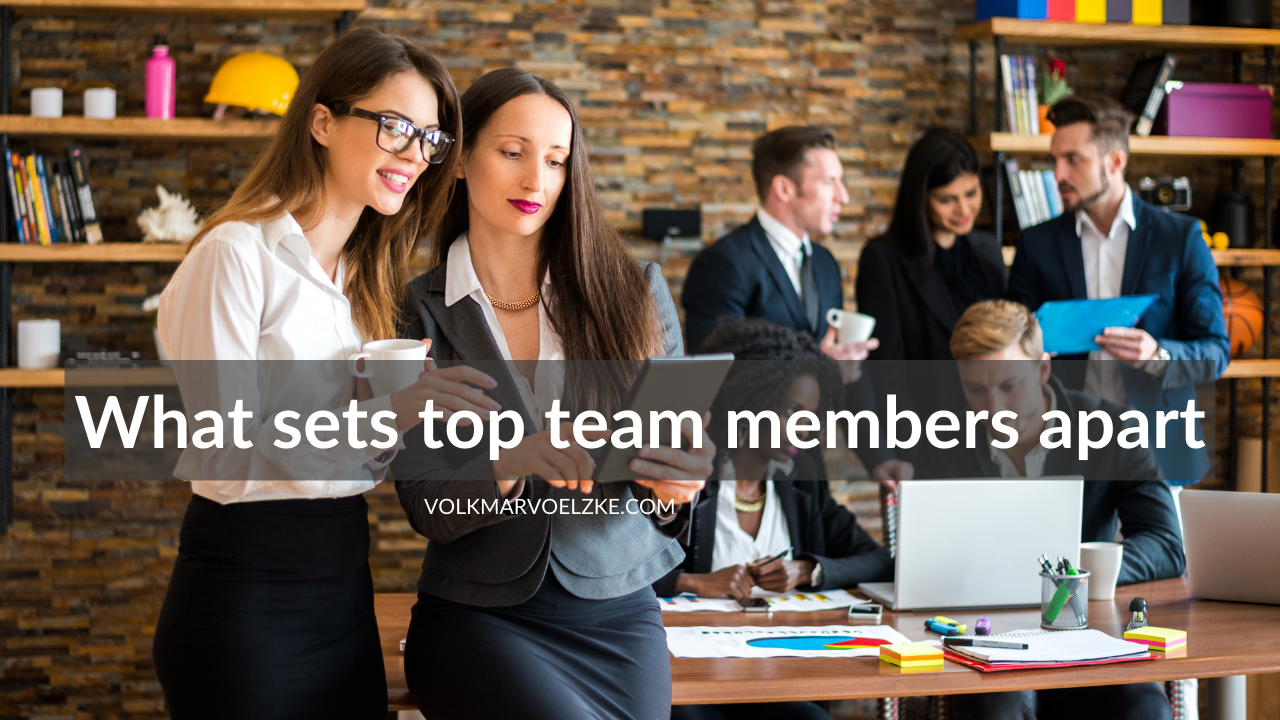 One of the most common desires of leaders is that each of their team members pulls together with the others in the same direction and delivers top performance with enthusiasm.

Well, unfortunately, the reality is usually quite different. Almost every team has a strong variance in all matters that would be important for a top team. Some people are not very motivated, others do not bring enough results, and still others take too little responsibility. And so on.

In my leadership coaching, I often direct attention to the composition of the team and what should be done about it if you want to create a top team. In any case, waiting and hoping for the better is not a good strategy (but one I encounter frequently).

From my experience, there are three key characteristics that distinguish top team members from mediocre ones: